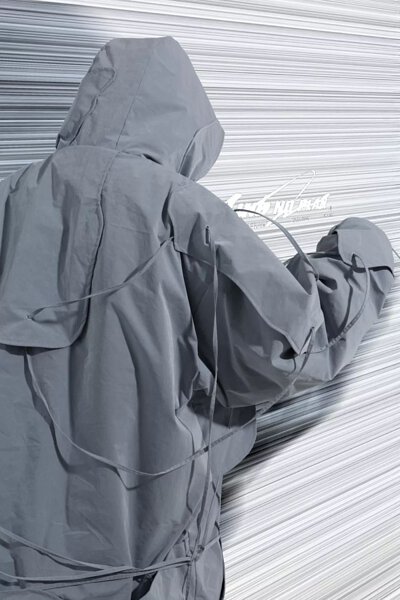 The name of the series is "New derived role" from a group of research subjects selected in the old period and transformed into new elements. Each individual gives himself a new role under active or passive adjustment settings. .

In order to express the pull, split and reorganization under the contradictions of various existences, we use the structural form of deconstruction and splicing. Some things like similar devices are melted into the costumes, and some interlaced forms are used, similar to the semi-finished products, the design of the drawstrings and the ribs is extended, the checkered suit shifts the single piece and rotates, and the twisted contrast color is inserted. The hand-drawn styles and manuscript records of the research class are presented on tee.

Faced with the prospect of moving forward, and constantly paying attention to the past, we are also innovating in retro colors in color and style, giving people a multi-level divergent wearing experience. The fabrics are mostly soft and gentle and contrasted with the neat cut. I hope that each character has the toughness to face everything and has a soft heart.

This theme is derived from the fantasy world of the clerk. He detached some characters from the retro movie characters, and they were drawn with unknowns and curiosity. The content is developed for the sake of better evolution and evolution. Finally, everyone is welcome to join the BLIND unplanned new derivative role.